Of Girls and Horses 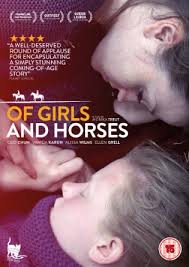 Of Girls and Horses

Girls love horses, according to Peggy Orenstein, author of Cinderella Ate My Daughter, because they identify with their strength. They are, Orenstein explained, in a NPR segment, a source of power and motion and transformation. This sense of transformation is what Monika Treut harnesses in her new film, Of Girls and Horses, which premiered at G&L IFF Turin at the beginning of May. Sixteen-year-old misfit Alex is a school dropout with self-harming tendencies, including drug abuse and cutting. With no more patience, her adoptive mother sends her to a Northern German farm to work with horses as an intern. Her mentor, Nina, trains the horses, and takes on Alex as a trainee. Most important, through her interaction with the horses, Nina shows Alex how to stop moving mindlessly in the world. Alex is taught to be more present in how she moves in the world as an energy encountering other energies. Horses are these unadulterated forces, bodies of energy that demand a type of mindless concentration what the Chinese call wu wei from humans. In order to interact with them, in other words, Alex needs to be fully in her body without being too much in her head. She has difficulty first. There s an awkward moment, when Nina is teaching her how to move a horse with her body rather than the harness, that Alex grabs Nina for a kiss. It is a moment of frustrated transference, which ceases overtime, as Alex becomes more comfortable with the horses, as well as herself. The arrival of Kathy, an upper class girl, is, Alex s test in this coming-of-age film. Can Alex maintain her newfound equilibrium, even in the presence of lust? The conflict of Of Girls and Horses is purely emotional but is rendered metaphorically through both Alex s relation to the horses and the horses well being and general safety. It is no surprise that the horses escape the barn and get lost the night Alex gets Kathy drunk and kisses her. Of Girls and Horses is a departure from the earlier work that put Treut on the queer map I mean, I still giggle nervously when I think about her 1992 documentary Female Misbehavior with Camille Paglia. This film turns toward youth, toward innocence, beauty and power as they exist in nature. Some moments linger too long in the heaviness of metaphor, and some parts of the narrative, particularly Nina s story about her relationship with her partner, feel disconnected from the primary plot. Yet Treut is asking the viewer to sit, rest and take in the energy around them it is the same task demanded of Alex. This injunction is subtle and startling, just like the vital energy of girls, and of horses.