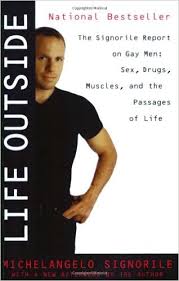 Michelangelo Signorile was an outspoken advocate of gay culture whose brush with mortality after engaging in risky sex changed his outlook on life. In Life Outside, Signorile, a columnist for Out magazine, explores the changing lifestyles and mores of gay men through interviewing and surveying hundreds of gays--in the cities, in the country, and everywhere in between. In addition, he provides a fascinating history of gay culture, from the closeted '50s, when most homosexuals found sexual release by "servicing" straight men, through the '70s and '80s, when physical beauty and promiscuity became the hallmarks of gay life. --This text refers to an out of print or unavailable edition of this title.

In Life Outside, the first book of its kind, Michelangelo Signorile has interviewed hundreds of gay men from all over America: urban and rural gays, black and Hispanic gays, gay fathers, police officers, senior citizens and baby boomers. These generations of gay men have done what no others in history have -- lived the majority of their lives out of the closet. Among the trends emerging from this mosaic of experiences: the "deurbanization" of gay life; the increasing frequency of long-term monogamous relationships among younger gay men; the increasing acceptance of gays in forward-thinking religious institutions; the cult of masculinity in urban gay culture; and the myth of the lonely old queer. Sure to be controversial, Michelangelo Signorile's analysis of the state of gay America -- rich, vital, diverse and ever-changing -- makes fascinating reading. --This text refers to an out of print or unavailable edition of this title.