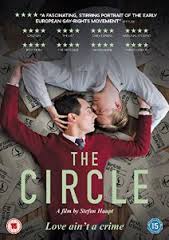 Der Kreis (The Circle) was a gay magazine published in relatively tolerant 1950s Zurich. The men behind it were nonetheless vulnerable to ostracism, blackmail or losing their jobs — especially amid hysteria over a string of rent-boy murders.

Against this mounting paranoia is set the story of teacher Ernst and drag queen Röbi — later Switzerland’s first gay couple to marry.

Part drama, part documentary, it feels unsure which it most wants to be.

That said, the underground cabaret scene of the 1950s is atmospherically conjured, in touching contrast with the normality of the real-life couple having tea at home, and still together after 58 years.