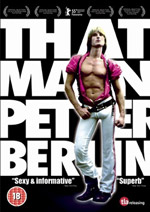 In January 2006, the documentary opened theatrically to great acclaim.With his trademark Dutchboy haircut, Tom of Finland physique, and oh-so-tight trousers, Peter Berlin was the poster boy for the hedonistic and sexually-liberated 1970s. Jim Tushinski’s fascinating, sexy, and ultimately touching documentary, That Man: Peter Berlin, traces Berlin's story over the past 40 years, from his birth in wartime Germany to his current life in San Francisco, and shows the human being behind the icon.

Most illuminating and exciting, of course, is the extensive commentary by Berlin himself, still looking remarkably boyish in his early 60s. Tushinski's interviews are complemented perfectly with an astonishing archive of photos and film clips that reveal the full scope of Berlin’s impressive body of work.

That Man: Peter Berlin is directed and produced by Jim Tushinski and co-produced by Lawrence Helman