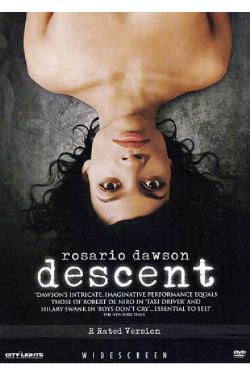 Rosario Dawson produces and stars in DESCENT, a project directed by her real-life friend Talia Lugacy, and one close to the actress's heart. A very dark film, DESCENT assures viewers from the very first frame that something is going to go wrong. There's just something off about the colors, the sets, the slow-moving dialogue. Many critics have said the film begins with Dawson as a carefree college girl navigating the fun, party-filled world of college. But Dawson's character, Maya, is not your typical sorority girl. Instead, she's a smart, serious student who spends much of her time alone and has apparently not had a date in months. So when a good-looking guy named Jared asks her out and will not take no for an answer, she reluctantly accepts, having no idea that their short-lived romance will culminate in his date-raping her in
a basement.

DESCENT is about revenge and also about the downward spiral that a young woman endures as a result of being sexually violated. Rather than telling anyone about the rape, Maya keeps it to herself, transforming step by step into a girl unlike the one she was before. Trading in her studious ways for a lifestyle of nightclubs, drugs, and risky sex, Maya blames herself for what happened and seems intent on self-destruction. Lugacy's film spans several months but inches along at a slow pace due to the simplicity of the plot. The majority of the film's drama takes place inside its protagonist and in the final revenge scene. The film's final take will prompt discussion among viewers, who are left to interpret whether revenge itself can actually heal wounds or just open new ones.