Homophobia in 1970s Spain: Psychiatry, Fascism and the Transition to Democracy 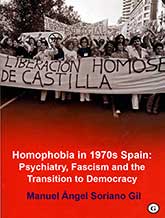 Homophobia in 1970s Spain: Psychiatry, Fascism and the Transition to Democracy

Four decades after Spain began its transition to democracy, homophobia is still thriving in some conservative parts of Spanish society. LGBT Spaniards have, of course, made great legal strides: Parliament decriminalized homosexuality in 1979, passed the Marriage Equality Act in 2005, and approved the Gender Identity Act in 2007. Even so, a great many Spaniards—especially ones who had strict religious upbringings during the forty-year dictatorship—still hold fast to prejudices and misconceptions that their collective unconscious cannot give up, which keeps them from adjusting to a new social reality.

This 21st-century paradox is what led the author to publish his doctoral thesis about antigay prejudice, written in the 1970s, during Spain’s transition from the Franco regime to democracy. At the time, his “freethinking” thesis advisor at Complutense University of Madrid agreed to defend the thesis to the doctoral panel, but in 1980, he suddenly rejected it as “unconvincing”.


Still, bad news is often good news in disguise: only a handful of scholars ever see a doctoral thesis, while a published book enjoys wide distribution and can make the unknown known to a wide audience.

Translated by Steven Capsuto:
Steven Capsuto studied translation at Rutgers University and has been a full-time professional translator since 2003, specializing in commercial, technical, medical and literary texts. Recent projects include English translations of five stage plays for the Sala Beckett’s Catalandrama Project, and a forthcoming English edition of Ángel Pulido’s Sephardic Jews and the Spanish Language. Steven has been involved in LGBT causes since his student activist days in the 1980s. In Philadelphia, from the late 1980s to mid-2000s, he was the main coordinator of what is now the Wilcox LGBT Library and Archives, serving as its librarian or archivist at various times. He is the author of a book about lesbian and gay images on 20th-century television: Alternate Channels (published by Ballantine), which was a semifinalist for the Stonewall Book Award. He lives in New York City.