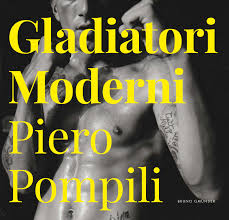 Bodies, sweat, the direct gaze; strength, courage, doubt; the visual and emotional alphabet of Piero Pompili’s work is characterized by intensely striking images. For 15 years, the artist photographed with passion the world of boxing, which he frequented in Rome and Naples, in the gyms of the borgata.
In these popular suburbs of Italy’s major cities, where Calabrians and Sicilians were crammed in the postwar years, Piero Pompili captured an atmosphere redolent of Pasolini accents. The artist was as fascinated by his subject as with the social and urban landscape in which they lived, as evidenced by other aspects of his work: the working classes of Ostia, Roman-African hairdressers, etc.
The source of this fascination was a childhood spent in the Borghesiana (a borgata in Rome), where he was born in 1967. The boxers were part of the landscape, and Pompili developed a deep attachment to these epic heroes who fought every day in his city.
Hence a broad vision: through his photographic approach to boxing, Piero Pompili sought not only a formal truth, but also poetic, social and historical. The energy and passion of the common people of Rome had already fascinated Gericault (around the time of his “Course de Chevaux Libres”, 1817); Caravaggio, as well, had selected models from the streets of Rome to make of his genre paintings true “tableaux realistes.”
The photographer's approach is realistic; rather than an excuse to show idealized men locked in a clash of the titans, he shows the modern gladiators as not gods but real men, beings of flesh with their fears and their ambitions. Down-to-earth, they have their doubts as they approach the fight, their rage to express, causing them to accept discipline and sacrifice. “The real boxer should be afraid,” says Piero Pompili.
Therefore, in order to truly show the intensity and the stakes of their commitment, the artist has chosen to focus not on the time of battle itself, but the moments behind the scenes; from the hard routine of daily workouts to the hours of meditation and rituals before the final climb into the ring, the tension is thick and palpable. Mostly photographed by themselves, the boxers are alone to face the waves of adrenaline and anxiety preceding the fight. One is struck by the eyes, which gaze upon the mirror, defiant and melancholy. The bodies themselves speak: the detail of a bulging vein, the expressive power of a back, a torso, reminiscent of armor ready to go into battle.
Scrutinized in their workouts, studious, surprised in solitude, before the battle or in the silence of a deserted locker room, even in the hunted expressions that betray their looks or their bodies, Piero Pompili’s gladiators finally deliver a secret paradox: they must win a victory, whether in the ring or in life, that is above all about themselves.