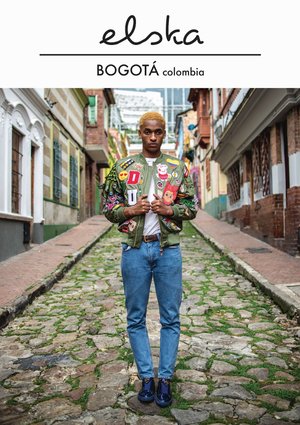 This Elska edition was made in Bogotá, capital of Colombia. It's our first time in South America and we are excited to put the spotlight on what is perhaps the gayest city in the Latin world.

Inside these 168 pages you'll meet fifteen local men who we shot throughout the city and in their homes, clothed and nude. In fact it's our most naked issue ever, which tells you something about the freeness of the culture here. It's perhaps not what you expect of Colombia, and we're here to show you that most conceptions we have about the country are mis-conceptions!

As usual each of the men accompany their photospreads with a personal story, letting you get to know them (and their city and culture) at an even more intimate level. Perhaps owing to innate Latin romanticism, the stories here are rather on the dramatic and poetic side. Among the texts there's Duv V’s account of falling for a man he couldn’t have - his teacher; there’s Andrés V's piece on how he got away from prostitution; there’s Leonard M's story on building a new Bogotano life after fleeing Venezuela; there’s Mario A’s love elegy to his Gabriel; and there’s Davo O’s tale of depression and his little ragdoll named Clemente.

Then beyond the fifteen Colombians shot on location in Bogotá, you'll meet two more Colombians shot elsewhere from our semi-recurring 'Elska Dehors' section. Here you'll meet Manuel B, shot in Astoria, Queens, and then David O-L, shot in Rhode Island while on a holiday to visit his boyfriend.