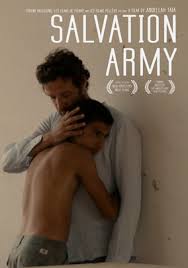 This is not a move for a cheerful evening's viewing. Abdellah Taia's cinematic roman a clef is a gritty, unvarnished view into the life of a Moroccan family, with all of its dysfunctional aspects, and into the life of its gay son. In addition, it portrays the dark underside of much of the Islamic world in which there is rampant homosexuality and in which the aggressive sexual attention of older men toward younger men and boys is condoned, but in which the younger men are ofttimes socially stigmatized and not culturally allowed to have genuine relationships with other men as equals.

There are very good acting performances here, particularly those of Said Mrine as the young Abdalleh, Karim Ait M'Hand as his older version, Amine Ennaji as his brother Slimane, Malik El Hamaoui as his mother (she is quite good) and Abdelhak Switah as his father. Most of the actors are Moroccan or, at least, of Moroccan descent.

The film itself creeps along at times with little major's occurring, and Abdalleh does seem rather aimless as he progresses through it. Filmed in large part in Casablanca, Azenmour and El Jadida, Morocco, there are shots of the Moroccan cities and homes that appear to be taken out of a still life, but instead of romantic, medieval, Orientalist figures, the people in the foreground are modern, unromantic Moroccans.

Being a fictionalized account of the life of Abdalleh Taia, this movie portrays a journey. We see how the environment he lives in changes and molds him. It is an incomplete journey for the movie ends with much of his life untold. One suspects that there could be another film's waiting to be made that will tell the rest of the story. What is revealed in it is the meaning of the movie's name for those who are wondering.

One thing that a viewer can take away from this film is that anything one can do alleviate the poverty in Morocco from buying Moroccan products to travelling there and pumping money into the economy in legitimate ways is a good thing. This movie clearly shows the cost of underdevelopment and the effects that it has on ordinary human beings. One does feel a sympathy for most of the people portrayed.