Naked as we came 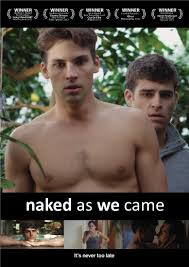 Naked as we came

A richly detailed portrait of love, loss and hope, Naked As We Came is a thoughtful depiction of one family's struggle to come to grips with their past before it is too late. After an unexpected phone call, Laura and her brother Elliot rush to their family's country estate to find their mother, Lilly, gravely ill and living with a handsome young stranger named Ted. Estranged for
some time, their mother's condition sets Laura and Elliot on a path to realizing where their own lives have gone wrong. Lilly, on the other hand, has mellowed from the controlling woman she was and is hoping to pass on some wisdom to her children. Now her kids find themselves dealing with their own feelings of resentment and broken dreams while trying to figure out how Ted fits into their mother's life. But Ted has a secret of his own. Written and directed by Richard
LeMay, the film stars Ryan Vigilant as Elliot (Gossip Girl), Karmine Alers as Laura (Rent), Lue McWilliams as Lilly (The Pill), and Benjamin Weaver as Ted.