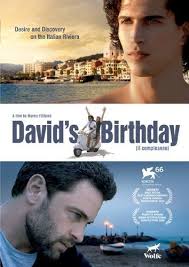 Two pairs of friends, Matteo and Francesca & Shary and Diego, decide to spend the summer together in a beach house at the foot of Mount Circeo. Matteo, a psychologist, is married to Francesca with whom he has a five year old girl, Elena. Diego and Shary have a less stable relationship, having a son together, David, who attends college in the United States. David comes to Italy for the first time in five years to spend time with his family and celebrate his birthday. Upon David's arrival, he and Matteo begin to develop feelings for each other. Only Leonard, Shary's brother, who has returned from his travels around the world to spend some time with the two pairs, seems to sense what is happening. The balance of Matteo's marriage begins to crack, and the growing tension seems to corrode the two families. While the rest of the household is out preparing for David's birthday party, Matteo goes to David's bedroom, and they have sex. When Francesca arrives back, she has no keys and enters the house through a patio door into David's room where she finds the two men having sex. She runs out, and Matteo runs after her. She dashes around a corner and into the street where she is hit and killed by a car. Later, Matteo, Shary, Diego, and David are having supper. Shary, inexplicably, asks Matteo accusingly where he was at the time of the accident, and the movie ends as he begins to cry.