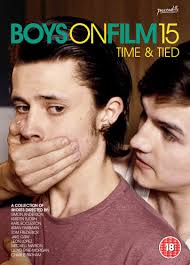 Embark on a magical journey through time with BOYS ON FILM: TIME & TIED featuring a brand new selection of sensational British short films that showcase some of the UK’s best emerging talent. 2016 and a night in a gay sauna turns into a fight for survival, while a relationship of a different kind becomes heated on a night out in London’s Soho. In 1962 literary revelations strike two men sitting on a park bench speaking Polari and a 80s teenager time-travels into the future through his bedroom closet. Back to the present and London’s chemsex scene is put into perspective during one night at a chill-out party. While in 1976 sexual adventures await those who gorge on corduroy with his queer materials in Sir John’s Trouser Bar. Time to get tied up with the most unique BOYS ON FILM collection to date.