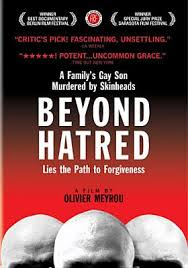 The documentary tells the story of a French couple seeking justice and feeling acceptance after the homophobic murder of their gay son, 29-year-old Francois Chenu. He was murdered by three white power skinheads in 2002, who beat him severely in the face and threw him into a pond. The attackers were arrested one month after the incident, and Meyrou read about the case on the front page of Le Monde. He had been wanting to make a film about homophobia for some time, and decided that the Chenu case was very emblematic.