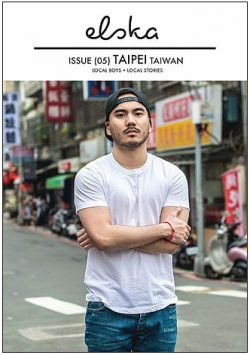 Elska is a bi-monthly male photography and culture art-zine on 130 pages of beautifully stroke-able matte paper. Each issue is shot in a different city with men from that city, including not only their photographs but their stories too. It’s a sort of cross between a quasi-intellectual queer pin-up and a sort of sexy anthropology journal.

In this issue: Issue 5 was made in Taipei, Taiwan. It’s our first edition to leave Europe, and we chose what’s fast becoming Asia’s LGBT capital as its setting. As a country whose identity can be associated with defiance against Chinese communism, Taiwan’s spirit of freedom spreads into the gay community, with one of the most vibrant and open scenes on the Asian continent. The response from Taipei’s local boys was so great that this became the hardest issue to edit down.

Not to be overlooked, showcasing Asian men, especially in a way that highlights their sexuality, is still a rarity among gay publications, or among all publications for that matter. Despite the bombardment of advice that no one would buy an Asian issue, we did it anyway, because of course Elska believes that all men are beautiful, sexy, and totally lovable.