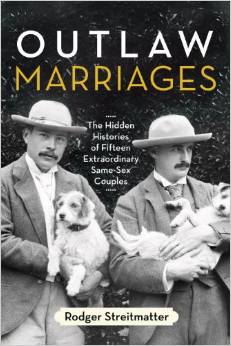 The engaging and untold stories of fifteen prominent same-sex couples who defied cultural norms and made signifcant contributions to American history.

Screen legend Greta Garbo owes much of her success to her partner, Mercedes de Acosta, who taught the actress how to dress and speak like Hollywood royalty. Frank Merlo weaned Tennessee Williams off a diet of drugs and casual sex so the playwright was able to create his Pulitzer Prize-winning drama Cat on a Hot Tin Roof. Iconic American poet Walt Whitman dotted his master work, Leaves of Grass, with references to his lover and his muse, Peter Doyle. Robert Rauschenberg urged Jasper Johns not to ignore a bizarre dream he had but instead to act on it and paint the American flag-as he had done in the dream. Frances Clayton gave up tenure at an Ivy League university to help her partner, Audre Lorde, reinvent herself as a pioneering poet who gave voice to women of color around the globe.

For more than a century before gay marriage became a hot-button political issue, same-sex unions flourished in America. Pairs of men and pairs of women joined together in committed unions, standing by each other “for richer for poorer, in sickness and in health” for periods of thirty or forty sometimes as many as fifty years. In short, they loved and supported each other every bit as much as any husband and wife.

In Outlaw Marriages, cultural historian Rodger Streitmatter reveals how some of these unions didn’t merely improve the quality of life for the two people involved but also enriched the American culture.

Among the high-profile couples whose lives and loves are illuminated in the following pages are Nobel Peace Prize winner Jane Addams and Mary Rozet Smith, literary icon Gertrude Stein and Alice B. Toklas, author James Baldwin and Lucien Happersberger, and artists Jasper Johns and Robert Rauschenberg.